Aaron Sansoni is an Australian entrepreneur that is known globally as ‘Mr Empire’. He is an investor, best-selling author, philanthropist, and business and motivational speaker who has started, built, or invested into over 100 companies to date. Beginning his entrepreneurial spark early in life by watching his father start numerous businesses, Sansoni started his first business at the age of 12; a local car wash for his neighbors. By the age of 17, Sansoni was already leveraging his aptitude for sales, working in door-to-door sales, over the phone, and face-to-face sales.

Aaron Sansoni was born on April 14, 1984 in Melbourne, Australia. He came from a migrant underprivileged family, growing up as one of three children. His parents divorced before he was two years old.

Attending Maroondah Secondary College in Melbourne’s Eastern suburbs, Sansoni struggled throughout school with behavioral issues; however, he managed to barely pass high school and graduated in 2001.

During his high school years, Sansoni became an accomplished cross-country runner competing at state level. He also had an aptitude for basketball competing at high levels. He eventually went on to play professionally for a season in Ireland in the national league in 2005.

Sasoni studied business for six months at TAFE until he decided to quit and start his own ventures, while living and traveling in Europe.

Aaron Sansoni was born in Melbourne, Australia. His parents divorced before his 2nd birthday, and he grew up in an underprivileged environment, barely passing high school.

His entrepreneurial spirit sparked at a young age and he followed many pursuits and passions, until finding success in starting, buying, and investing in businesses as well as building his venture capital firm (sansoni.com), which has been involved in over 100 businesses to date. Sansoni has been nominated for Australian of the Year 2017, Entrepreneur of the Year 2016, and Voted Top 125 Global Leaders – Success Magazine. He has been featured in Forbes, Entrepreneur, Success Magazine, and many other publications.

Alongside building his empire, he has also dedicated his time to helping other entrepreneurs follow in his footsteps by creating one of the largest education businesses in Australia (aaronsansoni.com). This business has worked with over 500,000 students worldwide.

Sansoni also spends his time growing his family foundation (aaronsansonifoundation.org) which has helped feed over 250,000 people, raised money for hospitals and sick children, and empowered youth through life education.

Aaron Sansoni is best known as a global investor having started, built, or invested into over 100 companies to date as well as being a globally recognised speaker. Beginning his entrepreneurial spark early in life by watching his father start numerous businesses, Sansoni started his first business at the age of 12; a local car wash for his neighbors. By the age of 17, Sansoni was already leveraging his aptitude for sales, working in door-to-door sales, over the phone, and face-to-face sales. Drawing on his already substantial corporate sales experience and a few years of running his own businesses, Sansoni opened his first consulting firm at the age of 23, which aimed to pass on what he was learning along his own journey in life and business. By his mid-twenties Sansoni had already created his first seven figure business in media. 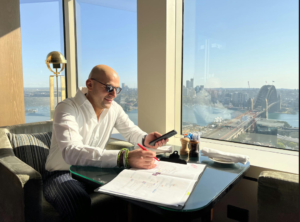 Currently, Sansoni runs a successful investment firm, Sansoni Management, which has multiple interests around the globe and a portfolio including media, technology, retail, hospitality, SAAS, education, telecommunications, space travel with an investment into SpaceX and more. While traveling the world he also educates business owners and entrepreneurs on how to build their own business empires through a series of programs. The Aaron Sansoni Group, Sansoni’s education business, also offers experiences and on-demand training programs aimed at starting, building, and scaling businesses.

To date, Sansoni has educated over 500,000 students from 137 countries. Sansoni also mentors top CEOs, athletes, and celebrities in his award-winning education programs. He currently offers exclusive 1-to-1 mentorship and business partnerships with a handful of people who are successfully picked during a rigorous vetting process. 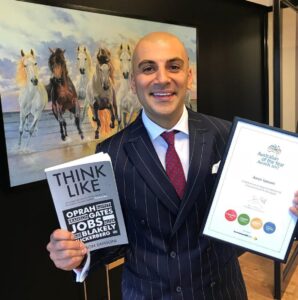