Aleem Zafar is a Pakistani media personality and celebrity manager who started his career early in 2005 by managing Sohaib Ali Khan, nephew of Shafqat Amanat Ali. He managed Khan for about three years, releasing his songs in India.

Aleem Zafar was born in 1st October in Karachi, Pakistan, His birth name is Aleem Qureshi but he is best known as Aleem Zafar.

Aleem escalated in his line of choice when he started to work for Pak Media Revolution (PMR), a well-known firm, as their head in Saudi Arabia in late 2010. Alongside this position, he also started to serve as the Official Representative of Koolmuzone. Through PMR, the young talent released several songs, among many was the song Juda by Bilal Rabbani, which gained marked popularity. In January 2011, Aleem became a part of the promotional work of the album Dhoom by Call the Band. Among other people whom Aleem promoted was Quratulain Balouch. Her first ever cover song ‘Ankhian Nu Ren De’ was released by Aleem on Koolmuzone.

It wasn’t late when Aleem decided to embark on a journey of his own and with that goal in mind, by the mid of 2011, the emerging talent left both firms to start his own called Beats24x7.

Beats24x7 served its purpose by helping young individuals to step up and promote their talents and show their skills to the world. It wasn’t long after the launch of Beats24x7 when it was nominated at Pakistan Blog Awards, supported by Google, under the category of ‘Best Blog’. Beats24x7 has covered several events across the world, the biggest being Ali Zafar’s concert in Bahrain.

He also released the Billy X track ‘Bechaini remix’ under his own production house. Some other celebrities Aleem has worked with include Uzair Jaswal, Roxen, Saad Sultan, Hamza Malik, Humaima Malick, Faakhir, Omer Nadeem, Bilal Saeed and many more. In the past, Aleem has also managed some underground artists, few of them were ‘Ifti‘, who sung the title track of drama serial Mai Abdul Qadir Hon, which was broadcast on HUM TV, Bilal Rubbani, Raast the Band and many others.

Aleem’s chocolate boy handsome look has always made his fans go crazy after him, some of them even considering him as the brother of Ali Zafar due to the similar looks and last name of the two. Aleem has endorsed several well-known brands and has even signed a film ’21 Miles’ which will be in production by the mid of 2016. Aleem also recently collaborated with Daniel Wellington, an international brand, for their Dappler York Watch line-up. He was also featured in three issues of the Young Adult Magazine Smash. He had exclusive interviews with Upstreet Magazine, Punjab2000 and many more.

Owing to his popularity and big fan-following on several social media networks, Aleem was also nominated under the category of ‘Best Emerging Star in Social Media’ at Shorty Awards, along with an exclusive interview.

In December, 2019 Aleem add one more work in his list & became an artist. He announced his first cover track which released on 6th December. His cover was a tribute to the ‘late Pakistani Legend Junaid Jamshed’ – Ilahi Teri Chaukhat Par which was widely appreciated by the fans in Asia. 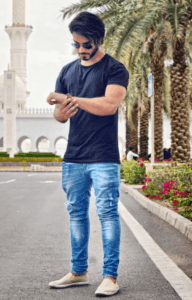 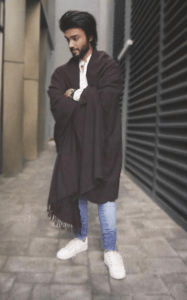