Samtu Palouki best known as Bernipk on social media, is an American soldier, actor, rapper and video editor that is best known for the funny viral videos and the catchy short films he shares on Facebook and Instagram. He’s made over 10 million views on Facebook only.

Samtu Palouki (Bernipk) was born in October 06, 1997 and was raised in Lome, Togo and first moved to the United States in April 2017. He joined the Army in September 2017.

Debut in the Army

After 6 months of being in the state, Samtu Palouki joined the US Army to get rid of his introverted personality and mostly learn how to be independent. He did 4 months of Basic and Advanced Individual Traning and was stationed in the 10th Mountain Division, Fort Drum, New York. Realizing that the soldiers around him were depressed due to the lack of activities in the area, with no prior experience in video editing, he decided to start making and sharing funny videos on social media from the comfort of his barrack’s room using his phone to record and edit. 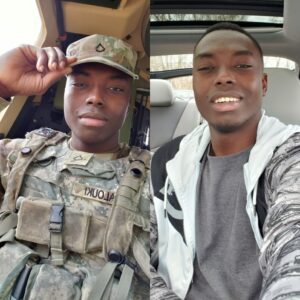 In May 2018, He shared a 15s video on his Instagram account that went viral in just few minutes. The “Choose your Character” video has appeared on the US Army official page, the LADBible, the news, various accounts on Tiktok, and has been remade by famous singer and comedian, Tyga and Destorm.

In September 2019, Bernipk took his first step into Filmmaking by releasing “The Room Inspection” a 20min long short film. He instantly fell in love with Acting and Directing that he released 4 months later, an 8min long short film “The Last Call”, that made 1.6 million views on Facebook and increased dramatically his popularity in the Army (Have some tissues nearby when you watch it).

The Last Call is a short film on the trouble that resulted from the assassination of the Iranian major general Qasem Soleimani and the deployment of US Soldiers to Iraq. He shared his third short film “The Deal” playing the character “TheHatBoy” and was featured in the AUSA Magazine in March 2020 as the new generation soldier and social media influencer. Towards the end of the month of March, he shared another short film “Be safe out there”, a video on the coronavirus pandemic that grabbed the attention of the commanding General of Fort Drum, Major General Mennes.

He loved it so much that he agreed to participate in one of Bernipk’s videos. In May 2020, “Stay productive during Coronavirus” was released and The Two-Star General was featured in the 4min long short film. He also made a film during the Black Lives Matter protest in June 2020. The short film is titled “Let’s not forget the message” and talks about the struggle black people are going through.

Bernipk constantly ponders his next big move, but his work started out humbly with short takes on life at Fort Drum. His intention was simple, to make soldiers around him happy and show them no matter how boring or mundane things may seem, you can make your own fun.