Frankee Cochran also well known by her stage name Frankee Baby was born April 7th 1991, is mostly known for her (2014)extra role in WWE as a rose bud for Adam Rose. She is also known as a social media influencer, model, aspiring wrestler, and aspiring actress.

Frankee Baby was born and raised in Topeka,Ks(USA) April 7th 1991. Her parents are Doris Cochran and Jay Cochran, she has two sisters Jessica Cochran and Amanda Troxel. 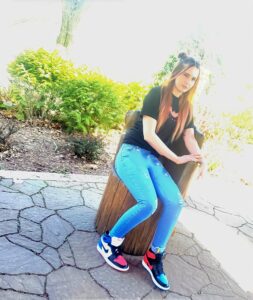 Frankee Baby has two children, Lewis Creek and Mason Creek. Their father passed away in 2016.

Frankee Baby‘s biggest dream since she was very young at the age of 4 was to be a professional wrestler; in 2014 at the age of 23,she was offered a role in WWE as an extra, she later pursued her dreams and started training to wrestle in Kansas, she is currently training with XWE. She was discovered as a model influencer by Instagram model Allure Lee in 2020, she then signed with Defiantfirm Agency. She is also currently working on more projects to pursue acting as well.

Frankee Baby is currently still signed under Defiantfirm Agency to her manager Chris Michaels. She has worked with the likes of WWE, CIE Fashion Magazine, Mike Malone Fashion, and Parris Harris. She has also worked with brands such as Ruckus boxing gloves, Beauty By Earth, Raze Energy, Infatuation Apparel, and Las Vegas SummerSplash.