Ine Marie Wilmann (born: 18 February, 1985 ) is a Norwegian actress who made her TV debut in the NRK series Ansur and also played the role of Hege in Størst av alt , a Norwegian drama series of six episodes that aired on NRK1 in the winter of 2007. In 2011, Wilmann played the role of Liv Tone in the feature film I travel alone , in the trilogy about Jarle Klepp, based on the books to Tore Renberg. She gained global recognization for her acting in Netflix film Troll 2022.

Ine Marie Wilmann studied acting at the Oslo School of Art from 2007 to 2011 . After completing her education, she was on stage at the Teatret Vårt , the Trøndelag Teater in Trondheim and the Oslo Nye Teater , among others . In collaboration with Sara Li Stensrud she created the performance Happy to the End of My Days , which was staged at the Black Box Theater in 2012 . The roles she has embodied at the theater include the title role in Anne Frank , Kitty in Anna Karenina , Hilde Wangel in Henrik Ibsen’s The Lady from the Seaas well as the Aricia in Jean Racine’s Phèdre . Wilmann also became a member of the independent group Fourth Class Productions .

For her portrayal of Charlotte in Anne Sewitsky ‘s Homesick , she received the 2015 Amanda Film Prize for Best Actress and the 2016 Canon Prize Film Prize.  From 2014 to 2016, she played the role of Vårin in the television series The Third Eye , for which she received the television award Gullruten for best actress in 2016. From 2017 to 2019 she starred in the series ZombieLars as Alder. In 2018 she embodied the title role of the figure skater Sonja Henie in the biopic Sonja – The White Swan, for which she was nominated for the Amanda Film Awards for Best Actress. In the Exit series she played the role of Celine Bergvik from 2019,  in the German-language version she wasdubbed by Antje von der Ahe.

As part of the Berlinale 2019 , she was honored as a European Shooting Star.  In 2020, she played the title role in the comedy film Diana’s Marriage directed by Charlotte Blom.  In the thriller series Furia by Magnus Martens and Lars Kraume with Nina Kunzendorf, which was first broadcast on ZDF in November 2021 , she took on the role of undercover agent Ragna.  In the German version, Kaya Marie Möller lent her the voice. 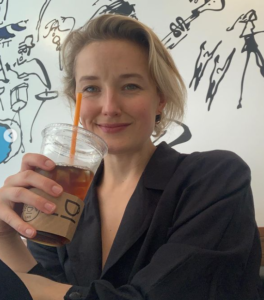