Justbrandon was born on October 2, 1993 in Norfolk, VA but moved to Gary, IN at the age of 3. In 2003 his family moved to southern Indiana and he started writing and recording music shortly thereafter; he, along with his older brothers and frequent collaborator Rich Dondotta, formed a rap group and quickly started performing at local venues and night clubs. 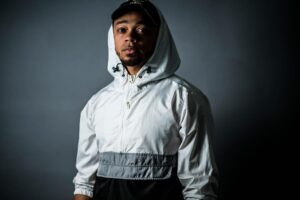 justbrandon first stepped into the spotlight in 2015 after writing songs for social media influencer Taylor Caniff such as “Private Party” and “On Me” which reached as high as #34 on the iTunes charts.

In the same year, Brandon released his mixtape In One of these Dark Alleys; his self-produced single from that mixtape, “All Through the City,” received cosigns from artists such as Glasses Malone, Raheem DeVaughn, and Murphy Lee.

In 2018 Brandon released three mixtapes of his own, Beware, Wolves, and In Sheep’s Clothing. Currently, justbrandon is most visible on his TikTok account where he regularly participates in rap challenges.