Ritu Porna Chakma is a Bangladesh women’s U-19 midfield football player who was born on 30 December 2003. In 2021, she scored double goal against Sri Lanka at Bir Shrestha Shaheed Shipahi Mostafa Kamal Stadium in the capital on Sunday.

Ritu Porna Chakma playing a very important role in carrying her family since her father passed away in 2015.

Ritu Porna Chakma is a Sportswoman who Playing Under Bangladesh Football Federation. She is well known among women footballers for her dribbling and passing skills, which helped her become a regular member in the national age-group teams as well as the senior team. However, the 18-year-old is not only a good footballer but she has also been playing a very important role in carrying her family since her father passed away in 2015. Ritu started playing football in 2012 and got momentum in 2013 when she represented her school in the Bangamata Gold Cup Football tournament. She then got herself admitted at BKSP in 2016 before being called up for the national U-15 camp for SAFF U-15 Women’s Championship. She is Known for Performance On SAFF U-19 2021. Ritu dedicated her wonderful goal against Pakistan to her younger brother, who passed away from a tragic accident in June. 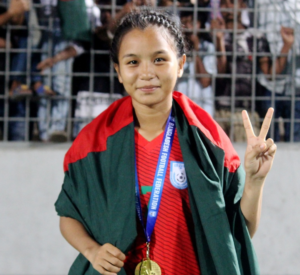