Tawhid Pritam is a Bangladeshi-British entrepreneur, professional filmmaker, photographer, video editor and travel vlogger who is the founder of Star One Studio, a multimedia company offering professional photography/ videography services for weddings, music videos. He is widely known as BO55TRY on social media. BO55TRY is a UK private car registration plate which he bought back in 2017. It’s currently installed in his very unique Urban Green BMW.

Tawhid Pritam was born on 12 February 1997 in Dhaka, Bangladesh. He is a British Bangladeshi living in London. He was only ten years old when he moved to the United Kingdom with his parents. Tawhid completed his education before venturing into the media industry in 2015. 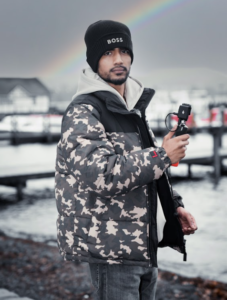 Tawhid has chosen a career in media to channel his intellect and artistry while sharing his perspective of the world, travelling all around the globe, and capturing moments to spread rays of love, joy, and happiness. As a travel vlogger, Tawhid’s creative process is simply looking at the world around him and recompensing to it. With a background in media and a sharp creative instinct, he aspires to combine his artistic skills and videography knowledge to create content that tells a story and exudes a rare bloom of originality over audiences.

Tawhid’s travel vlogging style has proven to be highly influential. It is distinguished by his atmospheric, ambient persona and introspective approach. Combining a fantastic sense of pragmatism and innovative spirit, Tawhid aims to capture moments and create memories that live with him and his audience forever. His vlogs have the power to inspire. With his charismatic personality, he establishes a genuine bond with his audience, and his content emanates a rare burst of creativity.

Throughout his professional career, Tawhid has accumulated in-depth experience and expertise in different photography/videography types with an elevated level of technical and commercial awareness and marketing flair demonstrated by an outstanding record of achievements. He is a polished professional with impeccable discretion, exceptional communication skills, an entrepreneurial approach, clear-eyed confidence, and a sharp eye for detail. Tawhid is an adaptable individual with the proven capability to perform in multi-ethnic environments efficiently. He is indeed a leader and can take responsibility for any project.