Kam’mryn Watson, better known as The Maap is a DJ, songwriter, independent artist, fashion designer, model and genre developer who was born on 27 May 1999 in Gardena California and  was raised in the Inland Empire. He is best known worldwide for his multiple musical talents from his skills on the wheels of steel, his unique sound on the mic and fashion designing. 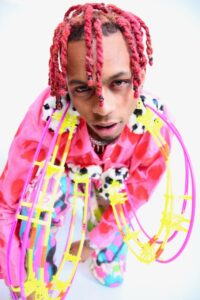 Kam’mryn Watson is a Multi-talented artist who began his journey from a young age. He is not only a great DJ, Artist and songwriter but also a , model, fashion designer, and genre developer. The Maap, aka Kam’mryn Watson continued to refine his music, eventually merging Hip-Hop ,Rock and Pop music to give vibrant birth to a brand-new genre, which he christened “Bed-Rock-Pop”.

The philosophy behind this electrifying new discovery is a confluence of his own history with Rock and pop, and his avocation as an avid skateboarding enthusiast.

The Maap has been seen on a billboard in the middle of Time Square with his hit single “To the moon” and featured in Magazines such as Hip Hop Weekly, Kazi Magazine and One West Magazine. His artistic style is widely inspired by his troubled childhood, life experiences and surroundings, and encapsulates the essence of human emotions like pain, despair, lust and anger.

In 2020, Kam’mryn founded his own record label, “Money Ain’t a Problem Entertainment.  This multi – talented individual was awarded a High School Diploma. He scored the highest SAT’s at Rancho Verde High School in 2017 and received both academic and athletic scholarships. He attended Georgia State University.