YungGlitzyBoy is an American musician, rapper, actor, YouTuber and model who is known as the king of doin it all because he has been known for doing acting, then YouTube then took off in rapping. He’s currently working on rapping and modeling/YouTube. He loves to brag about his jewelry, money, and how far he has come because his work ethic and mindset with manager.

YungGlitzyBoy began acting in 2018 on tv shows like The chi and chicago pd
And etc. And has 2 movies coming to AMC soon he’ll be in. 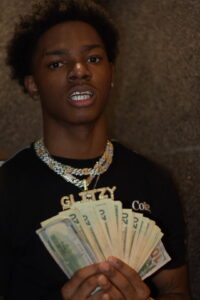 He started YouTube based off his sense of humor. Lots of his friends told him he was funny and would be great to make videos. So he peruses to do YouTube videos with friends at the mall and rack up views and dms begging him to do more.

He started rapping because he got tired of listening to others musicians when he can do better. He told his manager he wanted to rap and he put him with the right connections to help him rack up views and radio play, and takeoff in the rap game. He’s off to a tremendous start and hopes to keep going.

YungGlitzyBoy is known for his song “Doin Me” and “Lifestyle” by the vibes of the songs. One chilled and one lit. On the same day he dropped 2 days later it played on mainstream radio and then “hits you love radio”. His lyrics appeared on Genius and blogs.